97.2% Patient Satisfaction based on 329 ratings 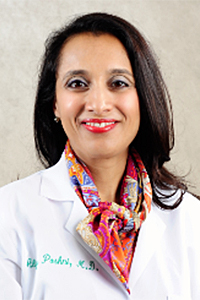 Dr. Poshni is a Fellow with the American Congress of Obstetrics and Gynecology and has been board certified since 2003. She is an experienced Robotic Surgeon specializing in advanced gynecologic surgery utilizing the daVinci surgical system. Dr. Poshni attended the University Of Maryland School Of Medicine where she received her Doctorate in Medicine in 1997. During medical school, she was involved in several research projects and received recognition for her work. She completed her residency in Obstetrics and Gynecology also from the University of Maryland. She was recognized for her excellence in resident training serving as Chief Resident from 2000-2001. She is currently an active member on staff at Holy Cross Hospital, Holy Cross Germantown Hospital, and Shady Grove Hospital. She is married with three daughters.