88.0% Patient Satisfaction based on 92 ratings 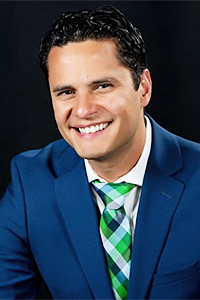 Eduardo Aguin, MD is a board certified physician through the American College of Obstetrics and Gynecology. He completed his residency at Wayne State University in 2012 and has extended training in the Maternal Fetal Medicine from the University of Michigan. He holds medical licenses in Michigan and Florida. Dr. Aguin is also fluent in three languages: Spanish, English, and Portuguese.

With a passion for delivering healthy babies, Dr. Aguin looks forward to providing the highest level of care to women in our community. He has recently relocated to Florida and traded the snow for sand. He looks forward to educating patients, staff, residents, and students. With a master’s degree in Public Health, his compassion runs deep for all his patients.

Dr. Aguin was born and raised in Venezuela, before coming to the United States he became a medical doctor in Venezuela at the University of Carabobo in 2003. He has several publications on premature births.

When Dr. Aguin is not in the office or at Lakewood Ranch Medical Center, he enjoys spending time with his fiancé and son. Keep a look out, you might see him playing soccer, running, or cycling around the Lakewood Ranch area.