92.6% Patient Satisfaction based on 70 ratings

Allison Anderson
4.63
Based on 70 ratings 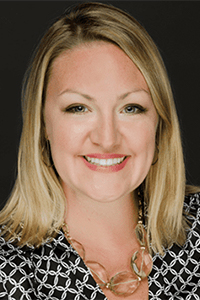 Dr. Allison Anderson is passionate about helping women throughout all stages of their lives, including adolescence, contraceptive health, fertility, pregnancy, and the menopausal transition. Her expertise and warm bedside manner help her patients feel comfortable and confident in their health, from routine annual visits to complex treatment plans, and everything in between. Voted one of the top three best OB/Gyn doctors in Austin by Austin Fit Magazine, Dr. Anderson attends to each of her patients with a level of care unmatched by many in her field. Her vast wealth of knowledge and experience in obstetrics allow her to care for high-risk, complicated pregnancies and routine pregnancies alike. Her approach to fertility is to make an individualized plan of care for each patient, and she loves the continuity in taking care of the same patient throughout the fertility and pregnancy journey. She also excels at gynecological surgical procedures, especially minimally invasive and laparoscopic surgery.

Dr. Anderson is from Baton Rouge, Louisiana. She moved to Austin to attend the University of Texas, where she received her Bachelor of Arts with a double major in Plan II Liberal Arts and Spanish with a concentration in premedical studies, graduating with High Honors. She moved to Dallas to attend medical school at the University of Texas Southwestern. She completed her Obstetrics and Gynecology residency at Parkland Memorial Hospital in Dallas, where she was honored with the Excellence in Medical Student Teaching award in 2005, 2007, and 2008. She then practiced as an Assistant Professor of OB/Gyn in the UT Southwestern – St. Paul OB/MFM private practice. After three years, she returned to her true home, Austin, with her husband Matt and joined Austin Area OB/Gyn.

Seven years later, Dr. Anderson and her husband are rooted as permanent Austinites and love exploring the city with their two dogs, a black Labrador and a miniature red dachshund. In her spare time, she enjoys traveling, cooking, live music, spending time with friends and family, and the occasional wiener dog race.

Dr. Anderson is extremely personable, outgoing, and is fluent in Spanish. Her focus is on her patients as individuals, while providing an unparalleled level of patient care.

Close
Sort options
Search filters
Service type
Reviewer
How we do it Why you can trust our reviews Find a provider
Active filters: Click X to remove any filter or reset all
All filters are off. Customize your search by using the sidebar options below.
Allison Anderson, MD Reviews (51)
10/07/2019

Dr. Anderson and her team are seriously amazing. They are very through and always make me feel heard.

This was my six week postpartum checkup. I couldn't even get the appt until eight weeks postpartum (I called to make it just two and a half weeks after having the baby). And of course once I was there, it was a 30 min + wait to see her. There are too many patients at the practice!

Dr.Anderson and her team in her office are amazing! They genuinely care about your well being. Felt Extremely comfortable!

Yes, the staff is always friendly and takes all the time I need to have all my questions answered! I feel very loved and special with Dr. Anderson and her staff!

I've been seeing Dr. Allison Anderson for years. I live almost 1 hour away and the drive to see her is worth it.

I love how easy Allison is to see. She's so upbeat and happy when I see her. [Single best thing is...] I feel comfortable in the exam room because of Allison. The atmosphere is also very clean and nice. I love getting my labs and seeing what my numbers are.

Everybody was wonderful. [Single best thing is...] I was still recovering from surgery, feeling bloated and tired, and having several people compliment me on how well I was recovering and moving around was exactly what I needed.

It was a quick and easy experience as always and Allison is always fantastic, but I had to wait an hour for her to arrive to the room to examine me.

Check-in and check-out are quick and simple and Dr. Anderson makes you feel comfortable. She is always willing to listen.

My water broke and had to have a c-section on Saturday and Dr. Anderson was not in. Dr. Capet ended up doing my c-section. She made me feel super comfortable and gave me plenty of options because I was initially trying for a VBAC, so I didn't feel pressured. She also let me know she is close with Dr. A and I felt like I was in good hands. The procedure went great! Overall, Dr. Anderson has been an amazing OB and we are so glad we chose her!

Didn't have to wait long. Dr. is very personable and her nurses are nice as well.

Dr. Anderson has always made me feel at ease and comfortable. I enjoy coming in even for a routine exam! [Single best thing is...] Dr. Anderson treated me like a friend. Just the general fun and lightness is enjoyable. She really empathizes with the patient - good and bad!

I had recently gone through an ectopic and Dr. Anderson helped me a lot to understand and give me tests to help me for the future. [Single best thing is...] She helped me understand why I was getting the test and what it meant to get it.

Dr. Anderson is very personable and level-headed - something that is refreshing through the highs and lows of pregnancy.

I was rushed and she did not perform the service that I scheduled. I came in for my annual Pap smear and a culture was never taken. I waited 10 days to receive my results, only to call the nurse and find out a swab was never even taken during my visit. Not only that, but I felt very rushed since the doctor had to leave suddenly in the middle of my visit to deliver a baby. I have been having health issues that I wanted to discuss with her, but never got the opportunity to since she left me high and dry. Not happy and switching to a different physician within the same practice.

Dr. Anderson is one of the best doctors I've seen. She has a great bedside manner and is an excellent communicator. When there was an issue during the delivery, Dr. Anderson handled it quickly and calmly.

Dr. Anderson has the sweetest bedside manner and immediately makes you feel like you're in the hands of someone who cares. She remembers my son's name, details of our history and shows me that she sees me as more than a patient ID. Having been a patient of numerous Drs, specialists and various facilities in our 5 years of fertility treatments, I can assure you that there are few doctors out there as warm and congenial as she is. Her nurses are top notch as well!

Received all the information I wanted and needed. Dr. Anderson is such a personable and knowledgeable physician. [Single best thing is...] Feeling comfortable with the state of my pregnancy.

I love Dr. Anderson and was happy I could schedule a mammogram right after my annual appointment. [Single best thing is...] Dr Anderson and her incredibly kind attitude and attention.

Dr. Anderson is so friendly and makes you feel so comfortable. Answered all my questions.

Really nice doctor, really helpful,she takes time to explain everything and help you to go thru everything with her. Supportive and so lovely

[Satisfied with...] Dr. Anderson and all staff.

Very knowledgeable in her field. Happy with incision healing had no complications.

I loved the interaction I had w Doctor Anderson. She worked with me to accommodate my birth wish timeline while balancing baby's safety.

The staff is friendly and caring, facility is clean and well maintained [Single best thing is...] Dr. Anderson is a really great Dr.

Dr. Anderson and staff are so friendly and take as much time as you need talking. [Single best thing is...] I feel like Dr. ANDERSON really knows me and her staff are all so nice.

Dr. Anderson is amazing and she made me feel so comfortable and I will definitely go back and see her. The communication for billing and online services could have been explained more thoroughly. Best thing was that Dr. Anderson was very kind and understanding

Dr. Anderson is always smiling and professional, answers any questions we have about our pregnancy. She has wonderful bed side manner and very knowledgeable

Dr. Anderson provided a complete exam, listened to my concerns, and was interested in my feedback. I was also able to complete my mammogram and routine blood work during the same visit, making additional trips unnecessary. I feel that I receive complete and important care through Dr. Anderson.

The doctor was very late to the appointment. I felt rushed due to that. She answered my questions but again I felt rushed.

Dr. Anderson & her staff make you feel very comfortable, are attentive, and get you in & our quickly, yet you don't feel rushed.

Easy to make an appointment. When I arrived only had to wait a short time and Dr. Alison Anderson was amazing!! Very personable and caring for my first visit. Took time to ensure any questions or concerns were answered. Also gave me some additional Dr. referrals that I requested. [Single best thing is...] Comfortable setting and friendly staff prior to meeting with the Dr. Very personable. Dr. Alison Anderson made the process very comfortable.

Very nice, service. Dr. Anderson, is lovely and nurses who help her, the same.

Dr. Anderson was wonderful. She was so welcoming and eased all of my worries and answered all questions thoroughly. [Single best thing is...] Dr. Anderson felt like an old friend and has excellent bedside manner which can be hard to find in some doctors.

Dr. Allison Anderson is always cheerful and enthusiastic from the moment she walks in the door until after the appointment. She has such a great spirit and sense of humor.

During my appointment, Dr. Anderson was not able to sufficiently hear my baby's heartbeat through the fetal doppler. Therefore, she brought out the sonogram machine to make sure he was doing okay. It was such a relief seeing his little heartbeat and watching him move on the screen.

The doctor was kind and compassionate. She had a light touch during the exam, which made it a little more comfortable. [Single best thing is...] Procedure was conducted respectfully, even with kindness. I liked getting my results online.

Doctor and staff were very accommodating and informative. They made me aware of what to expect before, during and after the procedure.

Allison is the best ob-gyn I've ever had. Quick, friendly, and addresses any concerns I have.

The staff members were all friendly. Dr. Anderson was great too, she's so sweet and friendly. I like that the results were emailed to me.

Every staff member I encounter is kind, informative, and genuinely interested in my well-being.

[Satisfied] Because I love Dr. Anderson - she's the best! And I had a great first mammogram experience with the tech who did it. [Single best thing is...] The bedside manner of my providers.

Dr. Anderson is always encouraging and interested in me. And she listens.

My whole appointment with Dr. Anderson was amazing. She was laid back which I loved! I have no complaints at all. Can't wait for my next appointment. [Single best thing is...] Getting to see the heartbeat during our first ultrasound.

Dr. Anderson is the best! She is extremely respectful and easy to talk to, and performs procedures flawlessly. I've had extremely minor pain/discomfort compared to other doctors for pap smears and iud insertion/removal.