93.8% Patient Satisfaction based on 166 ratings 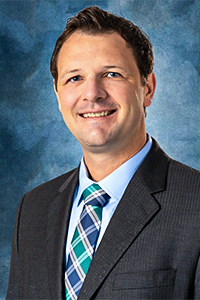 Dr. Biggerstaff grew up in Lincoln, NE and dedicated much of his time during his younger years playing soccer, in which he excelled—playing on club teams from both the Lincoln and Omaha area. After graduating from high school, he attended Creighton University, where he studied physics, as well as the other premedical basic sciences, and was a member and team captain of the competitive Creighton Men’s soccer team that routinely advanced deep into the NCAA championship tournaments.

In addition to his passion for growing his cosmetic surgery practice, he gets much joy in life from his family. He met his lovely wife, Kaleena, while living in Omaha prior to medical school and they were married after completion of his medical school in 2013. They have two young boys, named Enzo and Ira.

While he and his family enjoyed their time in California, they were very happy for the opportunity to get back to the Omaha area. He feels very fortunate for the opportunity to join such a well-regarded and well-established practice with an excellent reputation for both safety and outstanding aesthetic outcomes. He is excited to join a team of great and experienced surgeons, and is looking forward to bringing his own skillset, knowledge and some fresh ideas to the table.