100.0% Patient Satisfaction based on 21 ratings 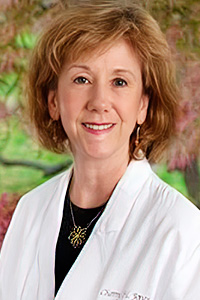 Cherry Jones grew up in Knoxville, Tennessee and obtained her undergraduate degree from the University of North Carolina at Chapel Hill. She obtained her Master of Science in nursing from the University of Tennessee in 1988 and was certified as a Family Nurse Practitioner in 1989. In 2017, Cherry successfully met the criteria and passed the examination to become a NAMS Certified Menopause Practitioner (NCMP). NAMS is North America’s leading nonprofit organization dedicated to improving health and quality of life through an understanding of menopause.

Though she works with women of all ages, Ms. Jones particularly enjoys working with teens, college-aged women and perimenopausal women. She also participates in the care of our pregnant patients and works with a number of patients who prefer to use bioidentical hormones. Over the years Ms. Jones has developed a strong interest in counseling patients on nutritional issues and believes in holistic well-woman care.

When not busy at West End she enjoys gardening, running and reading in addition to spending time with her husband and three children.