83.6% Patient Satisfaction based on 193 ratings 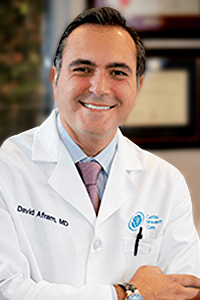 David Afram, MD, FACOG, is an experienced OB/GYN at Captial Women’s Care in Fairfax, Manassas, and Haymarket, Virginia. With 20 years of experience in obstetrics and gynecology, Dr. Afram has helped countless women and continues to provide quality, personalized care.

Dr. Afram’s medical journey began when he attended McGill University in Montreal, Canada, where Dr. Afram obtained a Bachelor of Science degree with honors in biology. Upon completion of his medical degree, Dr. Afram moved on to George Washington University Hospital, where he finished his medical residency training and where he also received the teaching award for Council on Residents Education in obstetrics and gynecology.

A former assistant clinical professor at the West Virginia School of Medicine, Dr. Afram has various medical areas of interest, which comprise of high-risk obstetrics and minimally invasive surgery, including laparoscopic and hysteroscopic surgeries.

In Dr. Afram’s spare time, he takes pleasure in spending time with his family and playing tennis and soccer. He also enjoys reading and has a special interest in history and international affairs. He is fluent in multiple languages including English, Arabic, and French.

Dr. Afram and his wife reside in Oakton, Virginia.