96.4% Patient Satisfaction based on 118 ratings 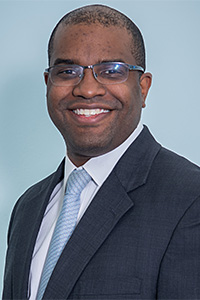 Earl M. Johnson, Jr., MD, is a board certified plastic surgeon. He joined the practice in 2015 and has since only added to the high quality experience that this premier plastic surgery center is known for. Originally a Baltimore native, Johnson completed his undergraduate career in the Washington, DC area, and then subsequently stayed in the Metropolitan region. Having lived and worked in this area his whole life, he desired to work where he was most comfortable as well as where he knew his skills were needed. His superb skills and desire to remain nearby is how he secured a position with Greater Washington Plastic Surgery Associates.

Dr. Johnson may be new to the office, but not new to the field. His extensive work and research speaks for itself boasting thorough training and field experience to get him to where he is today. Since joining the practice, his excellent results with patients has helped build a loyal customer base. Over the course of his career, he has received exceptional training and has been mentored by international leaders in plastic surgery. He has consistently been a top performer throughout his surgical training, and has also earned extremely high ratings from patients. While completing his education and residency, he was considered to be dependable, knowledgeable, and a technically excellent surgeon.

A graduate of Georgetown University, his academic achievements led him to be on the Dean’s List multiple times while earning his B.S. In addition to his studies, he served as a mentor for minority students who also shared an interest in the health profession. The community service effort was part of the Minority Health Initiative Council (MHIC) at Georgetown University. He then received his M.D. at the Emory University School of Medicine, where he was awarded the William C. Warren Scholarship, the Harris Family Scholarship, the Helen Dobbs Scholarship, and the Irene Woodruff Scholarship, and also served as a Chair of the Honor Council. He then returned to Georgetown for his Integrated Plastic Surgery residency where he learned the principles of plastic surgery as well as the latest plastic surgery techniques.

Since quality is key, Dr. Johnson is always studying, learning, and staying up to date with the latest trends in medicine, in order to be at his best for the patient. He stays abreast of the most current discoveries through his attendance of plastic surgery meetings and conferences. He has gone to numerous highly regarded events such as The Aesthetic Meeting sponsored by the American Society of Plastic Surgeons, Northeastern Society of Plastic Surgeons annual meetings, and many more held around the country. He has also attended instructional courses such as The Curtis National Hand Center Flap Course held in Baltimore, and the ASMS Advances in Facial Restoration and Rejuvenation course held in New Orleans. His own work is also a factor that cannot go unmentioned, such as his peer-reviewed papers on cancer research published in the American College of Surgeons and published abstracts in the Journal of the American College of Surgeons and Georgetown University Undergraduate Journal of Health Sciences. He has also given outstanding podium and poster presentations ranging in subject matter and taking place at events from the Annual Southern Surgical Association to the Georgetown University Undergraduate Research Conference to name a few. His current research includes two-stage breast reconstruction, advanced limb salvage technology, and complications of fat grafting.

Dr. Johnson’s understanding of his craft and personable demeanor fit right in with the level of integrity, quality and patient care the practice is known for. He now resides in the wonderful Washington, DC area where he joined Dr. Vineet Mehan at Greater Washington Plastic Surgery Associates.