100.0% Patient Satisfaction based on 17 ratings 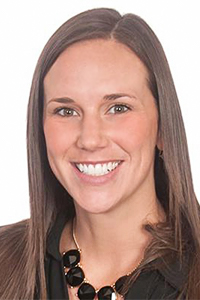 Growing up in New Prague, Erica Scheffler thought she’d become either a teacher or a nurse. “I knew I loved to teach,” she says, “but I was also fascinated by pregnancy and childbirth. My Mom did daycare for years, and with three brothers and one sister, I was exposed to caregiving my whole life! Taking care of people just feels natural to me.”

Scheffler earned her nursing degree at the College of St. Benedict, and went to work at Fairview Southdale Hospital as a post-partum nurse and lactation consultant. A self-described lifelong learner, Scheffler went on to earn her women’s health nurse practitioner degree. She joined Southdale ObGyn in 2012, where she thrived working as a NP in its collaborative, team-based environment.

She then moved to a leadership role at Fairview Ridges Hospital, as a patient care supervisor for their Birthplace unit. “It was very fulfilling to effect change in women’s health at a higher level,” she says, “but it kind of ate at me to leave my clinical role behind.”

In April 2017, Scheffler returned to Southdale ObGyn, where she’s now serving as the Director of Clinical Operations and working clinically as a nurse practitioner. “I am so happy to be able to combine the two things I love: leadership and working with patients,” she says.

A certified lactation consultant, Scheffler especially loves helping new mothers learn to feed their babies. “It’s such a vulnerable time for new families,” she says. “And to be a rock for them, providing whatever support they need, is huge.” Another favorite is watching patients hear their baby’s heartbeat for the first time. “It is so awesome to be part of that experience,” she says. “I just can’t wait for those moments!”

When she’s not at work, you’ll find Scheffler at home in New Prague, along with her high-school-sweetheart husband, Peter, and their three children. “I like spending time outdoors, traveling up north in the summer, yoga, and reading. But most of my spare time is spent being a wife and mother, and I wouldn’t have it any other way!”