98.4% Patient Satisfaction based on 595 ratings 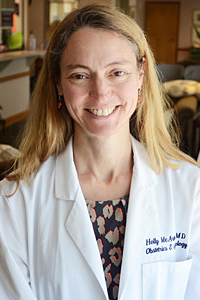 Dr. Holly K. McArthur was born in Boston, but grew up in England and Saudi Arabia.

She entered private practice in Asheville in 1998 and joined Laurel Ob/Gyn in January of 2005.

Holly enjoys running and traveling and being the mother of three rambunctious boys.