94.6% Patient Satisfaction based on 176 ratings 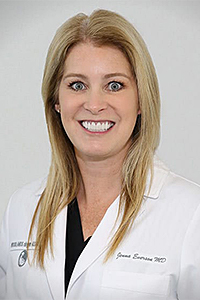 Dr. Everson is a board certified OBGYN physician and is a fellow in the American College of Obstetrics and Gynecology.

She was raised in the Midwest and then traveled East to attend Georgetown University in Washington DC for her undergraduate and medical school training. She graduated with a B.S. in Chemistry in 1992, and then from Georgetown University Medical School in 1996. She received numerous honors and awards throughout her education and decided to pursue a career in Obstetrics and Gynecology.

Dr. Everson moved to The Woodlands, Texas in 2004 where she has been in private practice at Woodlands OBGYN Associates with Dr. Raj Syal and Dr. Holly Westmoreland. Dr. Everson and her husband are actively involved in many aspects of the community with their three children and extended family.

Dr. Everson chose her career in obstetrics and gynecology because of her passion to care for women in all aspects of their lives. From adolescence through the reproductive years and into menopause, she appreciates the various challenges different phases of life present.

Her days are diverse-providing routine and preventive care, managing a wide variety of gynecological and obstetrical problems, delivering babies and performing surgery. She has pursued many professional interests including the management and deliveries of normal and high-risk pregnancies, pelvic pain, endometriosis, hormone dysfunction, adolescent care, contraception, gynecologic surgery and menstrual problems.

Facebook
Twitter
Close
Sort options
Search filters
Service type
Reviewer
How we do it Why you can trust our reviews Find a provider
Active filters: Click X to remove any filter or reset all
All filters are off. Customize your search by using the sidebar options below.
Jenna Everson, MD, FACOG Reviews (65)
06/09/2021

She listened to my concerns and took the correct precautions when I was in pain.

Dr Everson is always personable and makes me comfortable. Also the staff is always kind and explains anything necessary in a clear and understanding manner as well as gets back with me quickly if I have a question via online or phone.

Dr. Everson is very personable and explains everything she is going to do. She listens :)

Dr Everson always takes the time to visit with me prior to exam. This makes our visit much more personal. There was no waiting for her to come into the exam room. Everything just flowed.

The appointment was fast and efficient.

Dr. Everson has always spent time going over what is going on and and actually listening.

Listening to me, trying to find the trouble.

Dr. Everson was excellent in listening to my medical problem and gave clear resolve. She also was very understanding, compassionate and professional. Her staff person Amy was most helpful in scheduling my appointment. Dr. Everson's nurse was friendly and thorough in giving instruction, acquiring medical information and kind. Every staff person I spoke with from the receptionist who greeted me to the one checking me out was friendly, helpful and professional. The waiting room décor was peaceful and inviting.

She listens and acts based on her knowledge

The staff was very attentive and everything went smoothly.

Knowledgeable and comforting. Matter of fact and confident. She seems committed to quality care. From New York, she brings fresh perspective and a working knowledge plus experience into prenatal care, especially for mothers over 35, in need of a repeat c section.

Not really any convo just said everything was fine, and gave us directions for next time. I fell pretty lost in my pregnancy.

The entire office staff is friendly and puts me at ease. Dr. Everson is so knowledgable and thorough. I also like that she is efficient and usually on time. But I also feel like she will give me all the time I need to talk about issues.

Doctor knowledgeable and helpful. Professional care. Friendly. To improve feel the doctor could be more caring and compassionate in nature and comforting when delivery news.

Staff is always friendly and accommodating. Dr. Everson takes the time to explain your situation and provide options/opinions for the best care.

Dr. Everson is great with asking questions, giving patients the opportunity to bring up any issues or concerns.

Establishment is clean and welcoming. Dr Everson is incredibly personable, easy to talk to, and shows genuine concern for her patients.

I was able to get an appointment quickly. Once I arrived, check in was fast and I saw the doctor quickly.

Dr. Everson answered all of my questions. She was very gentle during the test and explained what further tests need to be done. The rest of the medical staff were all very professional and respectful. Overall I am very satisfied.

Everything was handled quickly, efficiently, and professionally.

Everyone went above and beyond.

Love how Dr.Everson attends to her patients and understands each and everyone

All staff except phlebotomist were not engaging and in a hurry for everything. Most barely stopped what they were doing to even give eye contact and talk in complete sentences. The girl in training and trainer at the front desk didn't even address my presence in front of them while they were discussing another aspect of work and when she did it was just, "Name?"

Efficient visit. Dr listens and responds well. In and out of office at a good pace. Friendly nurse and checkout.

Dr. Everson has such a great demeanor and was straight-forward and clear about everything, making it an extremely easy visit!

The office was very organized and clean. Everyone was friendly.

The problem I was having was resolved.

I arrived on time/a few minutes early. Several (5 or 6) individuals came late to their appointment and were taken back ahead of me. When I saw Dr. Everson, she said that the baby looked good, asked me how I was feeling, and then walked out before leaving me the chance to ask any questions. I had 3 questions unanswered. Additionally, I was feeling hot, thirsty, and lightheaded (low blood sugar) and was going to request a juice box or crackers from her. She left before I could ask. I had to ask the girls at the payment desk for help while I felt dizzy. She also did not draw blood this time, which I believe she was supposed to do.

Dr. Everson is so fast and efficient at the procedure! She explains as she goes and makes it as painless as possible. She is SO good at what she does!

Dr. Everson has a wonderful bedside manner and makes sure all questions are answered.

Very quick process in and out.

Everyone was really friendly and very professional.

Even though this was a routine exam, I felt like the doctor and staff were attentive to my concerns. My visit did not feel rushed at all.

Dr. Everson took the time to listen to us, explain everything thoroughly, and answer our question.

The appointment was quick but not rushed. The entire staff was welcoming.

I always feel like my wellbeing is cared for and they make the appointments smooth and quick.

Once prepped for the procedure, everything went quickly and with much care.

Quick and easy. Nurse and doctor both were very welcoming and made the process easy.

Dr. Everson has been great in helping to figure out a problem I've been having for months now. Along the way we discovered other issues and she's been monitoring that too. She's very thorough and consistent. I really appreciate that in a doctor.

My issues were addressed.

Dr. Everson was so thorough and answered all of my concerns. She was so well-spoken, made me feel comfortable and heard, and outlined a step by step plan for my health. Amazing!

Office is run well and Dr. Everson was professional, knowledgeable and compassionate.

Staff was literally kind and caring through the entire visit.

The nurse was not as detailed, did not ask me if I had any medical changes. Also these past few years I feel as though the doctor is in a rush and has not been as detailed as well. I had a lump on my thyroid and it was not detected, this is not the first time or the first issue I am dissatisfied with.

She was informative when I asked questions but gave no emotional reassurance or guidance with anything. If I didn't ask she didn't say anything.

Great result in a short amount of time.

This was our first visit with Dr. Everson and her staff. We were transferring care from another OBGYN and were coming in for an ultrasound and first OB appointment with her. Unfortunately, we found out at the ultrasound we miscarried and the ultrasound tech was so gracious and kind. We appreciated the care, compassion, and time we were given and how we were brought directly into a room and everyone came to us. We truly could not have experienced such heartbreak in a better place. We felt the care and compassion.

The staff is amazing and Dr. Everson is very attentive and give great detail and lays it all out to not set up for false expectations during my birthing process

She was very sweet and knowledgeable! My last OBGYN was a nightmare as well as the birth of my first child so I was apprehensive when selecting a provider. She made me very comfortable.

Dr. Everson truly cares about her patients. She always allows me to ask questions and she does everything she can to ensure I'm happy and well taken care of.

Dr. Everson is nice and informative and doesn't keep you in the office too long.