95.2% Patient Satisfaction based on 37 ratings

Scroll down to read and filter verified real patient reviews for Karen M. Davis, DO . You can also see locations, or contact Karen M. Davis right here at RealPatientRatings®. 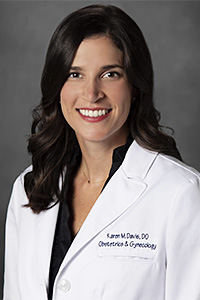 Dr. Davis was born and raised in the suburbs of Philadelphia. She graduated from Arcadia University with a Bachelor of Arts in Biology. Following her graduation from the Philadelphia College of Osteopathic Medicine, she completed her residency in Obstetrics and Gynecology at Wright State University and Wright Patterson Air Force Base in Dayton, OH. The Air Force then brought her to Hampton Roads where she practiced for four years at Naval Medical Center Portsmouth while serving as Associate Program Director of the OBGYN residency program. She and her family decided to make Hampton Roads their forever home and set roots in Virginia Beach in 2022 upon her separation from the United States Air Force at which time she joined WomanCare Centers. She is board certified in Obstetrics and Gynecology and a fellow of the American College of Obstetrics and Gynecology.

Dr. Davis enjoys practicing full-scope Obstetrics and Gynecology, with a focus on pediatric and adolescent gynecology. She has a special interest in assuring care for women with disabilities. Like all of her partners, she also performs minimally invasive surgical procedures and a variety of in-office procedures.

Dr. Davis and her husband keep busy with their son Charlie and daughter Brooke. She enjoys exploring the local food and wine scene, relaxing on the beach or poolside and walking the neighborhood with the kids.