98.4% Patient Satisfaction based on 182 ratings 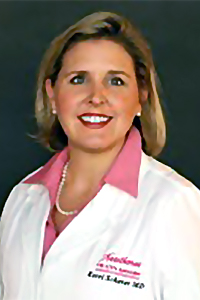 Kerri R. Scherer, M.D., was born while her father was in the military in Stuttgart, Germany. She moved several times until coming to North Carolina in 1990 to attend Duke University. She graduated with honors from Duke with a B.S. In Biology. Both her medical school and residency training were completed at Wake Forest University Baptist Medical Center. She graduated first in her medical school class, was elected to the Alpha Omega Alpha Medical Honor Society and received Excellence Awards from the Department of Obstetrics and Gynecology and the American Medical Women’s Association. While a resident, she acted as Chief Administrative Resident and was honored to receive several teaching awards. She was selected as Resident of the Year in 2003. She became Board Certified by the American Board of Obstetrics and Gynecology in 2005 and in 2007 became a Fellow of the American College of Obstetricians and Gynecologists.

Dr. Scherer joined our staff in July 2003. She enjoys all aspects of obstetrics and gynecology, but has special interest in adolescent care, high risk obstetrics, laparoscopic surgery and infertility.

Dr. Scherer and her husband have two daughters.