96.6% Patient Satisfaction based on 719 ratings 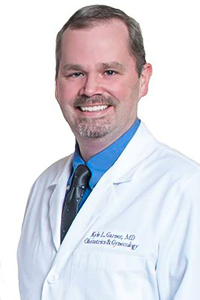 Dr. Garner arrived in Sarasota in 2006, He attended Davidson College in North Carolina where he graduated cum laude with a degree in Biology. From there he attended medical school at Wake Forest University/Bowman Gray School of Medicine and went on to become double boarded in both Obstetrics and Gynecology and Family Medicine from the University of Tennessee, Memphis. With an interest in Women’s Health, he joined the Family Medicine faculty and finished an obstetrical fellowship. His interest in surgery and high risk obstetrics grew and led him to complete another full residency in Obstetrics and Gynecology at the University of Tennessee, where he received honors as a gynecologic resident. Dr. Garner takes a special interest in minimally invasive surgical procedures and is certified in laparoscopic and DaVinci Robotic Assisted Minimally Invasive Surgery including myomectomy, hysterectomy and complex laparoscopy for endometriosis and adhesion resection. From 2012-2016 Dr. Garner served as Chief of Obstetrics and Gynecology at Sarasota Memorial Hospital where he worked with community leaders and hospital administration to improve women’s health services in Sarasota. In 2013, he ws named Physician of the Year at Sarasota Memorial Hospital, and has now been selected to serve as Chief of Staff at Sarasota Memorial Hospital in 2018. Dr. Garner also serves as an Assistant Professor with the Florida State College of Medicine, teaching medical students about women’s health. He hopes to provide the finest care to women and make Gulf Coast Obstetrics & Gynecology the premier women’s center of the Suncoast.

Facebook
Twitter
Youtube
Instagram
Close
Sort options
Search filters
Service type
How we do it Why you can trust our reviews Find a provider
Active filters: Click X to remove any filter or reset all
All filters are off. Customize your search by using the sidebar options below.