99.0% Patient Satisfaction based on 126 ratings 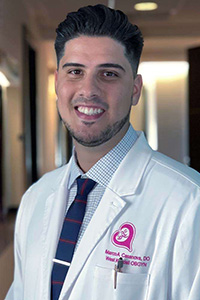 Marco Alejandro Casanova, DO, is a women’s health specialist at West Kendall OBGYN who prides himself in providing compassionate care to our West Kendall, Kendall, and Doral communities.

Dr. Casanova was born and raised in the Miami community as a first generation American from parents who immigrated from Cuba and Uruguay. His medical training began at nearby Nova Southeastern University-COM where he would go on to become the 2017 Class President. He completed his residency training in Obstetrics and Gynecology at Baylor College of Medicine in Houston, Texas where he would earn several teaching awards for his work with medical students and his colleagues.

Dr. Casanova offers empathetic and complete care for women of all ages. Besides providing high quality and comprehensive services in general obstetrics and gynecology and high-risk pregnancies, he has a special interest in minimally invasive gynecologic surgery, including the use of the DaVinci Robot, as well as in the evaluation of infertile couples, endometriosis, and irregular vaginal bleeding.

In his spare time, he enjoys traveling, playing soccer and spending time with his family and friends.