100.0% Patient Satisfaction based on 28 ratings

Pierre Limousin
5.00
Based on 28 ratings 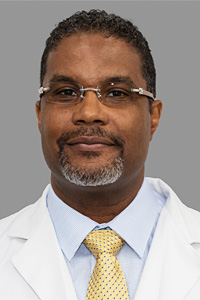 Dr. Pierre-Richard Limousin is a board-certified obstetrician and gynecologist located in Miami, FL. He has played an integral part in caring for our community for many years. He obtained his medical degree from the Universite D' Etat Faculte de Medicine et de Pharmacie in Haiti in 1993, followed by further specialty in minimally invasive surgery in Guadeloupe for over a year. To add to his accomplishments, he also obtained a medical degree from Rutgers Medical School in 2006. In his early career, he spent several years serving the local community through CHI. For more than nine years, he was an on-call gynecologist for the emergency department at Baptist Hospital while simultaneously managing his own private practice. His benevolence and passion for women's healthcare extends beyond Miami. He has helped organize and attend mission trips semi-annually to Haiti where he performs medical and surgical services to women without access to healthcare, free of charge. His commitment to women's health is unwavering and evident to everyone he cares for. In his spare time, he enjoys spending time with his wife and twin boys.