99.0% Patient Satisfaction based on 723 ratings 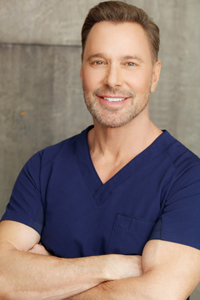 Rand Rusher resides in Beverly Hills and has over 20 years of experience working as a Registered Nurse. In the U.S, he ranks as one of the most in demand injection and skin care consultants – ranking with top doctors in the field. He is skilled in all specialties relating to surgical and dermatologic medicine and has achieved certification by multiple international pharmaceutical companies for his experience and proficient injection techniques.

Rand completed his education at California State University and also spent the beginning years of his career as a surgical nurse at the University of Southern California Norris Cancer Hospital and Research Center. After being in practice as a Registered Nurse at USC for seven years Rand earned national recognition and certification from the Association of Preoperative Nurse’s Association for his outstanding knowledge and skills in operating room nursing and all related surgical specialties. Later on, after expanding his skills, Rand joined Dr. Norman Leaf as the lead injection specialist at the Leaf & Rusher Medical Skincare Clinic. He worked alongside with Dr. Leaf to create Leaf & Rusher Skincare – an advanced program focused on non-acid technology with active and botanical ingredients.

Since 2011, Rand has been featured on the Reality TV Show called Pretty Hurts, which showcases how Hollywood stays looking so good. The show has aired in over 38 countries, including Australia, Canada, Russia, Italy, Sweden, Israel, The Netherlands, and Poland.

Rand is a member of several professional organizations and holds current certifications in a wide range of nursing specialties. He is an active member of his community and supports numerous charities around the world. He has also published articles in magazines such as Hero’s, the Journal of Oncology Nursing, AORN Journal, and Journal of School Nursing.