96.4% Patient Satisfaction based on 462 ratings 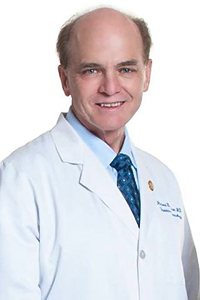 After completing his residency in 1984, Dr. Jamison fulfilled his long-term dream of joining his father in the practice of Obstetrics and Gynecology at Methodist Medical Center, Dallas. While practicing in Dallas for over 20 years, he served as Chairman of the Department of Obstetrics and Gynecology for four years. He became very closely tied to the residency training program through Methodist Hospital and in 1999 was nominated by residents and recognized by the Council on Resident Education in Obstetrics and Gynecology for Excellence in Resident Education. In addition to this, Dr. Jamison maintained close ties with Southwestern Medical School and continued to teach Gynecologic Surgery to residents at Parkland Memorial Hospital for many years rising to the position of Clinical Professor.

In 2004, Dr. Jamison moved to Sarasota to join Gulf Coast Obstetrics and Gynecology. He has always enjoyed developing a close relationship with patients in the general practice of Ob/Gyn, caring for women through all stages of their lives. As such, Dr. Jamison has developed particular interest in the management of pelvic prolapse and urinary incontinence and has acquired advanced training in the surgical management of pelvic prolapse and pelvic floor dysfunction.

Dr. Jamison was originally Board Certified in Obstetrics and Gynecology in 1987, re-certified by written examination in 1995, and continues yearly Maintenance of Certification. He is an Assistant Professor at FSU College of Medicine and enjoys teaching medical students during their Ob/Gyn rotation. Dr. Jamison is active in the Ob/Gyn Department at Sarasota Memorial Hospital and has served on the departmental Quality Insurance committee for the last two years.