93.8% Patient Satisfaction based on 550 ratings 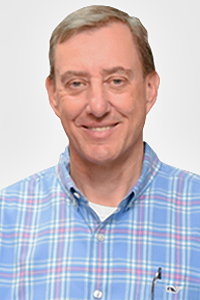 Ronald Gray Rogers, MD, MS, FACOG is a board certified obstetrician and gynecologist who has been caring for women in the Triangle area for more than 18 years. In fact, Dr. Rogers delivered the very first baby at WakeMed Cary!

A native of Raleigh, Dr. Rogers was inspired early in life by his grandfather, both a physician and dentist, to pursue a career in medicine. Today Dr. Rogers is an accomplished physician acclaimed by patients for his personalized care, and recognized by the medical community for his clinical contributions.

Dr. Rogers worked his way through N.C. State University earning his Bachelors Degree and Masters Degree, with honors, in Physiology and Biochemistry. He graduated from the University of North Carolina School of Medicine and spent two years in General Surgery, completing his internship at the University of Alabama at Birmingham Hospital. He then returned to North Carolina to complete a residency in Obstetrics and Gynecology at UNC. He served as a UNC faculty member as an assistant professor for three years before entering private practice.

Dr. Rogers is a Diplomate of The American Board of Obstetrics and Gynecology and a Fellow of The American College of Obstetricians and Gynecologists. He was presented the “Young Investigator Award” from the American Society for Reproductive Medicine (ASRM) as a resident at UNC, and was voted by the medical students at University of Alabama Birmingham as Surgical Resident of the Year. The faculty at UNC awarded Dr. Rogers the Outstanding Laparoscopic Surgeon award, and NC State University honored him as the Outstanding Young Alumnus.

Dr. Rogers lives in Raleigh with his wife, Kathryn, and his four children.