96.0% Patient Satisfaction based on 239 ratings 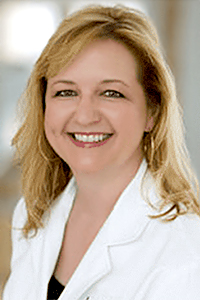 Dr. Crockett earned her MD at Texas A&M University College of Medicine in 1991 and completed her OB/GYN residency at Georgetown University Hospital in Washington, DC in 1995.

Dr. Crockett holds herself to the highest standards of medical care. She served as the director of obstetrics and gynecology for the Santa Rosa Family Practice Residency Program and was an assistant clinical professor for the Department of Family Medicine at the University of Texas Health Science Center at San Antonio. She was appointed to the US FDA Advisory Committee for Reproductive Health Drugs in 2004 and has co-authored many medical publications and two books.

In 2012, Dr. Crockett was named a Top Doctor by US News and World Report for robotic gynecologic surgery. She’s been named one of San Antonio's best doctors for many years.

Since 2014, Dr. Crockett has fully concentrated her efforts on the surgical side of gynecology. She has completed over 900 cases, and maintains an open surgical rate of less than 1%, with exceedingly low complication rates. Her passions include robotic surgery for benign complex gynecology, nonmesh options for pelvic floor reconstruction, and minimizing narcotic use for postoperative pain.