99.2% Patient Satisfaction based on 379 ratings 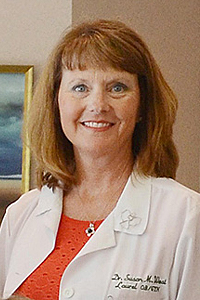 Susan was born and raised in a Chicago suburb and graduated from DePauw University in Greencastle, IN, with a bachelor’s degree in Zoology.

She then attended Bowman Gray School of Medicine at Wake Forest University, where she obtained her M.D.

After her four-year OB/Gyn residency at Methodist Hospital in Indianapolis, Susan moved to Asheville and Laurel Ob/Gyn in August 1995.

Susan has two sons: Michael is a geology major at UNC Charlotte and Matthew is a Film Studies major at UNC Wilmington. She also enjoys playing the flute and piano.

Together with her husband Jeremiah, they all enjoy spending time outdoors in the beautiful high country of NC, especially during ski season!