91.8% Patient Satisfaction based on 260 ratings

Tanya Ghatan
4.59
Based on 260 ratings
Value for the price 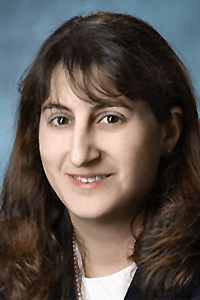 Tanya S. Ghatan, MD, MBA, FACOG, of Capital Women’s Care in Rockville, Maryland brings a wealth and breadth of experience and expertise to the practice.

She then moved to Massachusetts, where she served as a clinical instructor at Harvard Medical School in Cambridge, Massachusetts and an attending physician in the Department of Obstetrics and Gynecology at Brigham and Women’s Hospital in Boston. She also worked as a consulting physician at Dana-Farber Cancer Institute and a physician at Faulkner Hospital, both in Boston, before returning to the Washington area.

She went back to George Washington University, this time to earn an MBA with a specialization in Healthcare Focus. She also worked as the medical director for MedStar Women’s Community Health Practices at MedStar Washington Hospital Center while serving as an assistant professor at Georgetown University.

Some of Dr. Ghatan’s accolades include an Excellence in Teaching Award from the Association of Professors of Gynecology and Obstetrics, earned while she was at MedStar hospital; the Eleanor and Miles Shore Fellowship from Harvard Medical School; and the Samuel and Miriam Dodek Award for Excellence in Reproductive Endocrinology from George Washington University.