96.0% Patient Satisfaction based on 5 ratings 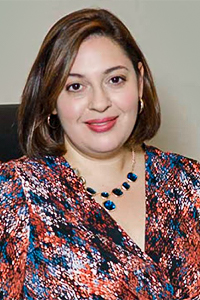 Dr. Figueroa has earned many honors and distinctions including first place in these categories: Adolescent Pregnancy Demographics and Corresponding Neonatal Outcomes, and Prevalence and Susceptibility of GBS Strains (in two poster presentations). She also presented at the SACNAS Annual Convention, was a student mentor and Former President of UPR–Cayey Honor Studies Program. Her commitment to excellence in education earned her several sponsored trips, awards, and distinctions. This commitment to excellence carries through to her practice today.

Dr. Veronica Figueroa, originally from the Bay area of California, is married with three children, 2 in college and one under five. She appreciates the fact that she lives and works in the same community, and often gives health talks at local retirement homes or the Osceola Regional Hospital. In her free time she enjoys photography, cooking, baking, volleyball, sculpture, and crocheting.