97.2% Patient Satisfaction based on 102 ratings 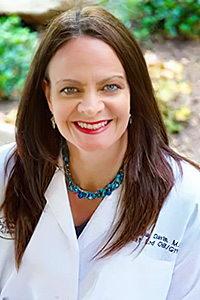 Dr. Davis graduated from the University of Virginia, where she was honored as an Echols Scholar. She earned her doctor of medicine at the Medical College of Virginia in Richmond. She remained at MCV for internship and residency training in the field of obstetrics and gynecology. She is board certified with the American Board of Obstetrics and Gynecology.

She is a fellow of the American College of Obstetrics and Gynecology and is a member of the American Medical Association, the Richmond Academy of Medicine and the Richmond Society of Obstetrics and Gynecology. Dr. Davis performs the Da Vinci Laparosopic Robotic Surgery. This allows faster recoveries from hysterectomies and other major surgeries. She has been practicing with West End ObGyn since 2000.

She enjoys all aspects of obstetrics and gynecology, and has a special interest in pediatric and teen gynecology, high-risk obstetrics, general wellness, postmenopausal health and the use of hormones, as well as their alternatives. She values the relationships she has made with her patients and is committed to providing the best care for them.

Away from the office Dr. Davis enjoys time with her husband, two daughters, son and their dogs.