95.2% Patient Satisfaction based on 646 ratings 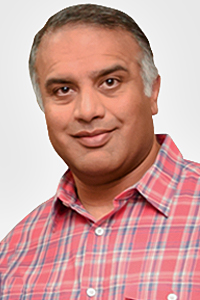 Vijay Sheshadri, MD, FACOG is board certified in obstetrics and gynecology and has been practicing since 1995. Originally from Ohio, Dr. Sheshadri earned his undergraduate degree from The Ohio State University and went on to get his Doctor of Medicine from the Medical College of Ohio. He attended the University of Louisville for his medical training and is a Fellow with the American Congress of Obstetrics and Gynecology and a Diplomat of the American Board of Obstetrics and Gynecology.

Dr. Sheshadri moved to the Triangle with his wife, Bethany,in 1999. He co- founded Physicians for Women and has worked with several device companies training other physicians on surgical procedures. He also works as a consultant for the pharmaceutical industry. In addition, Dr. Sheshadri is a member of the Board of Directors for the Victory Over Sarcoma Foundation. In his spare time, Dr. Sheshadri enjoys playing golf and tennis and spending time with his wife and two daughters.