95.6% Patient Satisfaction based on 143 ratings

Eshanjit Sapra
4.78
Based on 143 ratings
Value for the price 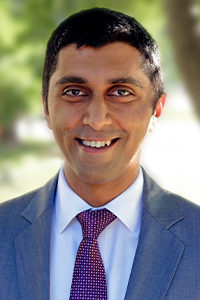 Dr. Sapra completed his medical education at Weill Cornell Medical College in Qatar. He started his Ob/Gyn residency at Jamaica Hospital in Queens, New York and graduated from Sinai Hospital in Baltimore in 2017. After residency, Dr. Sapra served as an attending physician at Women’s Health Associates, St. Joseph’s Medical Center in Towson. In 2018, Dr. Sapra joined Capital Women’s Care in Towson. His interests include obstetrics and minimally invasive gynecologic surgery. Dr. Sapra was born in India, but grew up around the world. As the son of a diplomat, he has lived in the UK, North Korea, the Middle East and the Caribbean. In his free time he enjoys hiking, traveling, learning about different cultures, and spending time with his two dogs. He is married and has two nieces.