97.2% Patient Satisfaction based on 888 ratings 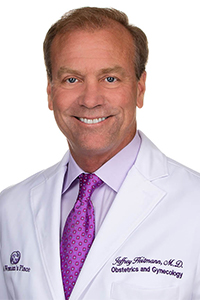 Dr. Heitmann is the founding partner of A Woman’s Place. He established a private practice in Naples in 1988 after completing medical school at Wake Forest University School of Medicine and a residency in Obstetrics and Gynecology at the University of Florida in Jacksonville. Well respected in the Naples area, Dr. Heitmann was named one of Gulfshore Life Magazine’s Top Doctors in 2005, 2006, and 2007. He is interested in high and low risk obstetrics and minimally invasive surgery including endometrial ablation, laparoscopy, hysteroscopy, TVT, and laparoscopic assisted hysterectomy. Dr. Heitmann was one of the first gynecologists in Naples to implement da Vinci® robotics in gynecologic surgery. Outside of the office, he enjoys spending time with his family, snow skiing, and boating.