95.2% Patient Satisfaction based on 58 ratings 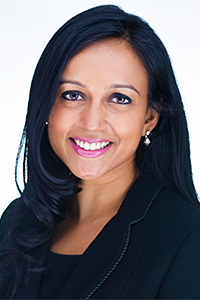 Dr. Kudesia is Board-Certified in Reproductive Endocrinology and Infertility by the American Board of Obstetricians and Gynecologists. She has many years of experience in IVF treatment, IUI treatment, PCOS treatment, gestational surrogacy, among other areas. She joined CCRM Houston in 2018 after practicing in New York City, where she was named a “New York Super Doctors Rising Star” in 2016 and 2017. After joining CCRM Houston she has also been named a 2019 Best Fertility Specialist in Fort Bend County by Living Magazine, 2019 Top Doctor by Houstonia, and 2021 Castle Connolly Top Doctor.

After completing her Baccalaureate degree in Biology & Medicine magna cum laude from Brown University, she received her M.D. with honors from the Duke University School of Medicine, where she was selected into a clinical research training program co-sponsored by the National Institutes of Health. Her residency training in Obstetrics & Gynecology at the New York Hospital-Weill Cornell Medical Center was followed by subspecialty training in Reproductive Endocrinology and Infertility (REI) at the Albert Einstein College of Medicine-Montefiore Medical Center, alongside a Masters’ of Science degree in Clinical Research Methods. She subsequently served as a Clinical Assistant Professor at the Icahn School of Medicine at Mount Sinai, as well as the Research Rotational Director for the REI fellowship, and Medical Director of the Brooklyn office of the Reproductive Medicine Associates of New York.

Dr. Kudesia is a Fellow of the American College of Obstetricians and Gynecologists, and an active member of the American Society for Reproductive Medicine (ASRM), Society for Reproductive Endocrinology and Infertility, Androgen Excess & Polycystic Ovary Syndrome Society, and American Medical Association (AMA). She has served in multiple local and national leadership roles in organized medicine, including her current positions as Secretary of the ASRM Women’s Council Executive Board and the ASRM delegate to the AMA Young Physicians’ Section.

Dr. Kudesia has presented scientific research at national and international conferences, and has received multiple awards and grants for her work. She has published peer-reviewed articles and book chapters, including in leading journals such as Fertility & Sterility and the American Journal of Obstetrics & Gynecology, as well as editing a theme issue on reproductive medicine for the American Medical Association Journal of Ethics. She is also author of the book, “Understanding Fertility Awareness Methods: Gaining Control of Your Fertility.”

Her current areas of focus include improving in vitro fertilization cycle prognosis, polycystic ovary syndrome, LGBT fertility, and fertility awareness, counseling, and access to care. She actively promotes women’s health and wellness on social media via Twitter, Facebook and Instagram.