97.2% Patient Satisfaction based on 21 ratings 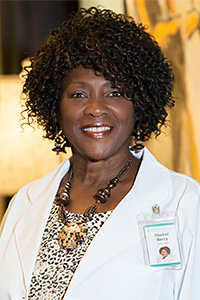 Shelrel was born in a small city in rural Alabama, the daughter of a farmer and a homemaker, and seventh of nine children. Shelrel acknowledges that her love for midwifery started at an early age when she was introduced to a lay midwife when she was just an adolescent. This sparked an interest in nursing, particularly, labor and delivery nursing. At that moment she realized that it was God’s plan for her to pursue nursing and subsequently midwifery as a career and what she refers to as her ministry. She believes that midwifery is a gift given to her to be “with women” encouraging and empowering them through one of the most miraculous moments in life.

Shelrel is married to Willie Frank Berry and they have four children and currently six grandchildren. Shelrel’s husband is a veteran of the U.S. Army and retired police investigator. They are a family-oriented couple that enjoys serving God by serving others. Shelrel also enjoys traveling and spending time with family and friends. She is extremely excited and thankful that she is able to continue to provide women with caring, compassionate and comprehensive quality health care at Emerald Coast OBGYN.