97.8% Patient Satisfaction based on 142 ratings 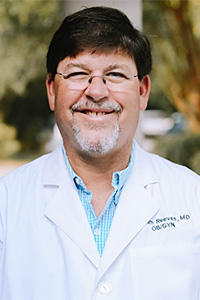 Dr. Reeves has been practicing in the Tri–County area since 1995. He was born and raised in Summerville, SC. He received a pharmacy degree from USC prior to graduating medical school at the Medical University of South Carolina. While in medical school, he was inducted into the Medical Honor Society, Alpha Omega Alpha. He completed his residency at Greenville Hospital System and has been board certified in OBGYN since 1997.

He has chaired several committees at Summerville and Trident Hospitals. He is a member of the Southeastern OB/GYN Society of South Carolina and Dorchester County Medical Society.

Dr. Reeves is married with four children, and a grandson born in 2022. His hobbies include fishing, boating, and coaching youth sports. He has practiced obstetrics and gynecology at our Summerville office since 1995.